What a wonderful performance! Our Bay Area Savoyards, the Lamplighters, outdid themselves in Mountain View this past Saturday evening, performing Gilbert and Sullivan’s Gondoliers with verve and passion. Samuel Rabinowitz and Michael Desnoyers were in excellent voice as Gieuseppe and Marco, the working class gondoliers temporarily transformed into a joint dual monarch until the regal birth of one or the other could be confirmed. Their putative mates, Gianetta and Tessa were exuberantly, yet coyly, realized by Amy Foote and Whitney Steele.   As usual in a Lamplighter’s production, the chorus is the star, bringing the fabulous duos Victorian operettas to life with sparkle, delivering a clarity of execution that made supertitles superfluous. The exception to the “predominance of ensemble over individuality rule” is F. Lawrence Ewing Duke of Plaza-Toro’s distinctive voice and comic demeanor.

In most of their oeuvre Gilbert and Sullivan ridicule the premises of aristocracy; in Gondoliers the “topsy turvey” or the world turned on its head maneuver is to question the assumptions of democracy and indeed, in the end, to uphold the institution of monarchy.  Which was skewered more, along the way, democracy or monarchy was hard to discern. Whereas Gilbert and Sullivan typically point out the foibles of British class structure in their fanciful operettas, Gondoliers or, The King of Barataria, is a musical essay in comparative political philosophy.  If the duo are not philosophers or high theoreticians, they are certainly philosophes in outlining the practical and sometimes absurd consequences of rule by hereditary versus government by everybody. As the song goes “If everybody is somebody than nobody is anybody” Republicans are shown to be easily suborn by the offer of aristocratic privilege and foolish when they try to maintain egalitarian ideals having accepted the appurtenances of hierarchy.  This contradiction is all too familiar in the UK when socialists are inducted into the House of Lords  . 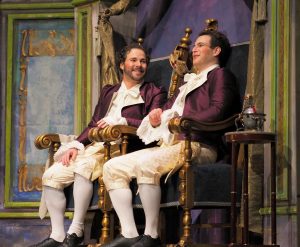 Behind their seeming questioning of the UK social order Gilbert and Sullivan reveal themselves to be true traditionalists at heart.  Gondolier’s Republicans all too readily eschew their egalitarian principles when they are offered the chance to be King and then try to retrieve them by declaring equality in the royal household and polish the silver and perform other domestic chores. As the plot unfolds, our two ex-democrats are found to be faux aristocrats and are superseded by a real aristocrat in the finale when four, the two former gondoliers and their mates become five and then six as the true monarch is discovered and united with his intended mate, betrothed in childhood.   Six then become one as the couple ascend the throne, restoring order to the world with a unified monarch and gondoliers returned to their proletarian status, taking their mates with them.

There was also a gender sub theme with a modest role reversal as women, in courting, give flowers to men. But when it came to actual choice the social order sprang back to conventional mode as the men, not the women, were blind folded to pick mates from the crowd.  Nevertheless, if the “proof is in the pudding” their choices of Gianetta and Tessa make a good case for selecting a mate by chance! Fate, arranged marriage, the converse of fortune is validated in the denouement when the Nurse who disguised the future King as a commoner at birth for protection, reappears ‘deus et machina’ and reveals that a seeming servant is lord and master, with a marriage already contracted.

All is good fun from the opening “List and Learn’ tune to the closing disclosure ‘Here is a case unprecedented.’ If by mischance you missed this round, be sure to catch up with the Lamplighters on their next Bay Area tour from downtown San Francisco to Walnut Creek, Livermore and Mountain View. Lamplighters Music Theater is a worthy inheritor of the Doyly Carte mantle, shifting the centre of Gilbert and Sullivan mania from London to us.