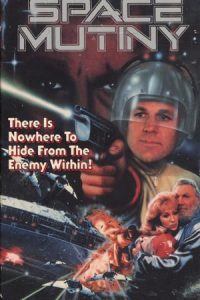 If there’s one takeaway from this month’s Rifftrax Live event it’s this: it’s possible to completely riff on an entire movie twice and recycle only a small handful of jokes. It takes great comedy writers to do it, but it’s achievable.

Okay, there’s a second takeaway: when Apartheid-era nations make space movies, the future is SO WHITE.

So there’s this South African space opera that was made by very, very white people with more money than sense, and if what appears on screen is any indication, there wasn’t much money. The year was 1988, and in a haze of Aqua Net, shoulder pads and crotch-floss bodysuits, possibly the worst space movie ever made hit, I don’t know. Some screens. Somewhere. Not our concern here.

What is our concern – and our good fortune – is that nine short years later, a much younger Mike and the bots of Mystery Science Theater 3000 poked vicious televised fun at this schlock epic and it became an instant classic episode among diehard “MiSTies”. Fast-forward to 2018, because you can do that in science fiction, and the alumni of MST3K, having struck out on their own after the conclusion of the original series many moons ago, have moved into cinemas for live cinematic disembowelments.

Rifftrax, the brainchild of the original head writer, Mike Nelson, and the last two actors to play bots Tom Servo (Kevin Murphy) and Crow T. Robot (Bill Corbett), is an online comedic enterprise that upended the “riff” model of the TV series, which could only afford the airing rights for incredibly bad old movies. The Rifftrax model instead allows users to purchase for just a few bucks an audio track that can be played alongside the movie, and without copyright constraints, this opened up the opportunity to riff on even the biggest blockbusters. The latest version of their smartphone app listens to the film you’re watching (via cable, streaming service, DVD, whatever) and automatically cues up the jokes for perfect comedic timing. And with the success of their audio-only model, the riffers upped their game to include live-via-satellite events. It’s ingenious.

Performed live at the Belcourt Theater in Nashville, a typical Rifftrax Live event includes at least one short subject and a full-length feature, with the riffers poking fun on-stage next to the screen. And since most of us can’t mosey on over to Nashville of an evening, it’s beamed into theaters everywhere via Fathom Events.

It would be a disservice to spoil any of the jokes, but it’s worth noting that very few of the original snarky insertions from the original MST3K version ended up in this one. The passage of 21 years de-fangs some jokes and makes room for newer gags that resound better with today’s audience, and it’s hard to say which is the better version.

Every frame of this atrocity is worthy of scorn, and our funny Greek Chorus unleashes it at every opportunity. From the costumes to the casting to the scriptwriting to the sets and props, everything is on the table for satirical abuse.

Like that image immediately above. That’s supposed to be an epic, climactic battle between good and evil in the engineering section of a huge spacecraft.  Except of course it takes place in what appear to be plasticized floor polishers traveling at a walking pace in a boiler room featuring windows streaming in sunlight. The explosion when they collide is comedy gold.

80s style seems to reign over all other considerations in this squint-inducing film, so prepare for lots of leg, shoulder pads that would serve well in the NFL, and tragic, tragic hair.

The best thing about Rifftrax Live events is that they always run them again the following week, which means you still have a chance to catch the new version of this classic riff! The encore performance is in theaters Tuesday, June 19, so if you like snarky humor at a whip-crack pace, don’t miss it. As always, Fathom Events provides a seamless experience for live events that allows you to take part at any participating local theater. It’s hard to beat the ticket prices, excellent seats and all the other benefits of seeing an otherwise inaccessible show at your local cineplex.

You can find tickets here, on the Fathom Events website, and you can plan ahead for the next Rifftrax Live event in August, in which they’re planning to poke the actually decent film Krull with pointy verbal sticks. You can support Rifftrax Live events by visiting their Kickstarter page, and shop for cheap, funny audio commentary tracks on their website. And if you’re up for it twice, here’s the original MST3k treatment on Netflix.

Remember to come a little early! Even if you have reserved seats, you’ll want to be there 10-20 minutes before the start of the show because the Rifftrax guys like to have fun with the pre-show slide reel, including deeply mean-spirited jabs at contemporary culture and lots of terrific comedy songs.

March 7, 2018 Suzanne Magnuson ARTS & CULTURE, Music & Arts, WORLDWIDE 0
Spread the love
Spread the loveThere’s a reason it’s the world’s most popular and the Met’s most-performed opera. It’s one of the few where literally everyone is likable.  There are no villains, only the occasional foil, and the […]

October 28, 2018 Suzanne Magnuson Music & Arts 0
Spread the love
Spread the loveThis is the first time in twenty years that the Met has staged Samson et Dalila and this new production takes the idea of biblical spectacle very seriously.  You can see how it […]

March 5, 2019 Suzanne Magnuson Music & Arts 0
Spread the love
Spread the loveBizet’s masterpiece is a perennial crowd-pleaser and as seen in brilliant HD through Fathom Events, this version of Carmen has a great deal to recommend it. The production has seen fit to set […]