Eccentric and often scatterbrained scientist extraordinaire Jeff Baker (Randy Marquis) is currently separated from his wife Annette (Megan Blakeley) and hasn’t seen his daughter Abby for months. When who should show up unexpectedly on his doorstep but Annette – with Abby in tow? It seems that his estranged wife must leave the country for an extended business trip and has no one but Jeff to call upon to care for their little girl. And so begins the saga of a lovable but inept dad trying to understand his precocious child. Abby had better learn to love sardines for dinner – or else. When Abby becomes friends with her brainy young neighbor Everett (Van Brunelle) – and both decide to improve on Jeff’s disorganized computer files – the fur is sure to fly.

Meanwhile, sexy Southern belle neighbor Lu Ann Appleby (Eric Farnsworth) has her eye on Jeff. At the same time, Annette is currently involved with rich, gorgeous, and perfect Preston Conway (Brett Gustafson). The path of true love is certainly strewn with road blocks. While Jeff is frantically trying to meet his research deadline, things can easily get way out of control. Especially when little Abby decides to bring order to his harried and chaotic life and gives away his clothing to Salvation Army. Just the precise moment for social worker Merced Mason (Faith Streng) from Children and Family Services to get in the middle of the brewing storm. Sparks will surely fly in this charming family comedy.

Directed and adapted by James Castle Stevens, A BUNDLE OF TROUBLE is definitely family fare suitable for kids for eight to eighty. It is the warm and poignant story of a man who lives in his head and must now learn to express his thoughts and feelings – or suffer the consequences. 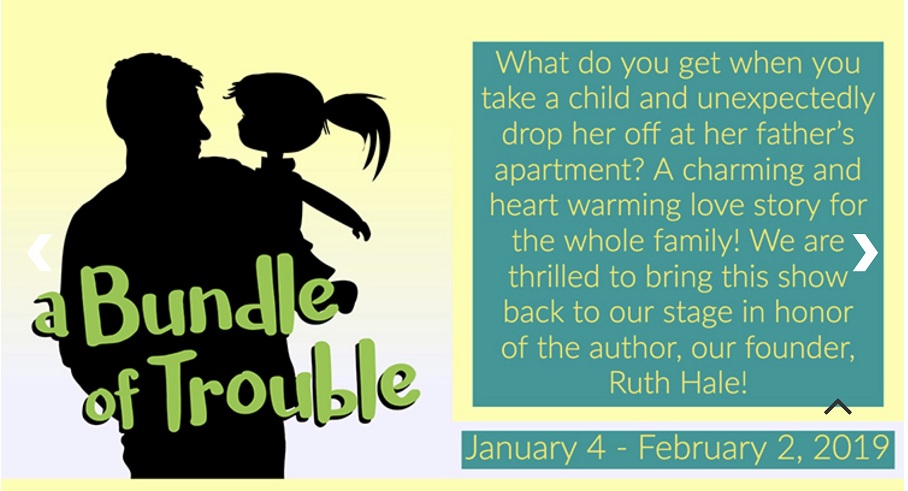 Is He Dead? Review – Mark Twain Pokes Fun at Art

October 25, 2017 Elaine Mura Entertainment 0
Spread the love
Spread the loveSamuel Clemens, better known by his pen name of Mark Twain, was convinced that he could make a lucrative career as a writer of plays. When his first play, “The Gilded Age,” premiered […]

March 15, 2018 Elaine Mura Entertainment 0
Spread the love
Spread the loveSince “Godspell” translates to “good story” (Anglo-Saxon) and “good news” (classic Greek), GODSPELL should be offering some portentous information to all of us. Based on the Gospel of Matthew (with some forays into […]