In a cunning depiction of Warren G. Harding’s ascent to the presidency of the U.S., talented playwright Colin Speer Crowley has woven history and drama into an intriguing whole. Skillfully directed by Jules Aaron, FIFTEEN MEN IN A SMOKE-FILLED ROOM arrives in Theatre 40 just in time for the upcoming election of 2020. 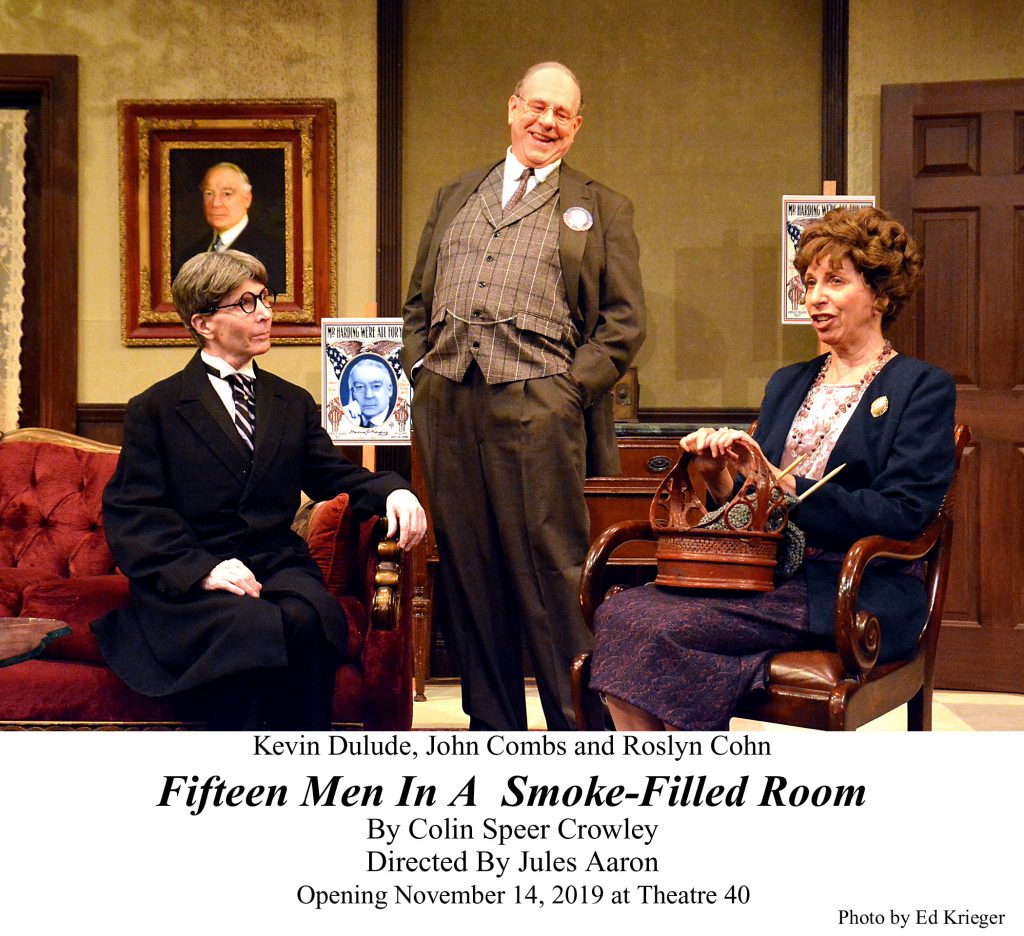 It is June 1920 in Chicago, and the Republican National Convention is stymied. As politicians swing to and fro in their machinations to select a candidate for President, nothing seems to be coalescing for the upcoming election. Pushed and pulled this way and that by Harry M. Daugherty (John Combs), his ambitious campaign manager – later to become the Attorney General of the U.S. – a reluctant Warren G. Harding (David Hunt Stafford) seems fated to become the GOP’s next candidate. His outspoken, superstitious wife Florence (Roslyn Cohn) can hardly wait to return to their home in Ohio, while his starry-eyed mistress Nan (Sarah Walker) dreams of his becoming POTUS. But the aging Harding really wants nothing more than a peaceful retirement in a quiet corner of the universe – preferably with his sweet young thing on his arm. But history has decreed otherwise – as any history buff will tell you. Harding’s administration, marked by a level of corruption rarely seen in Washington, is meant to be. 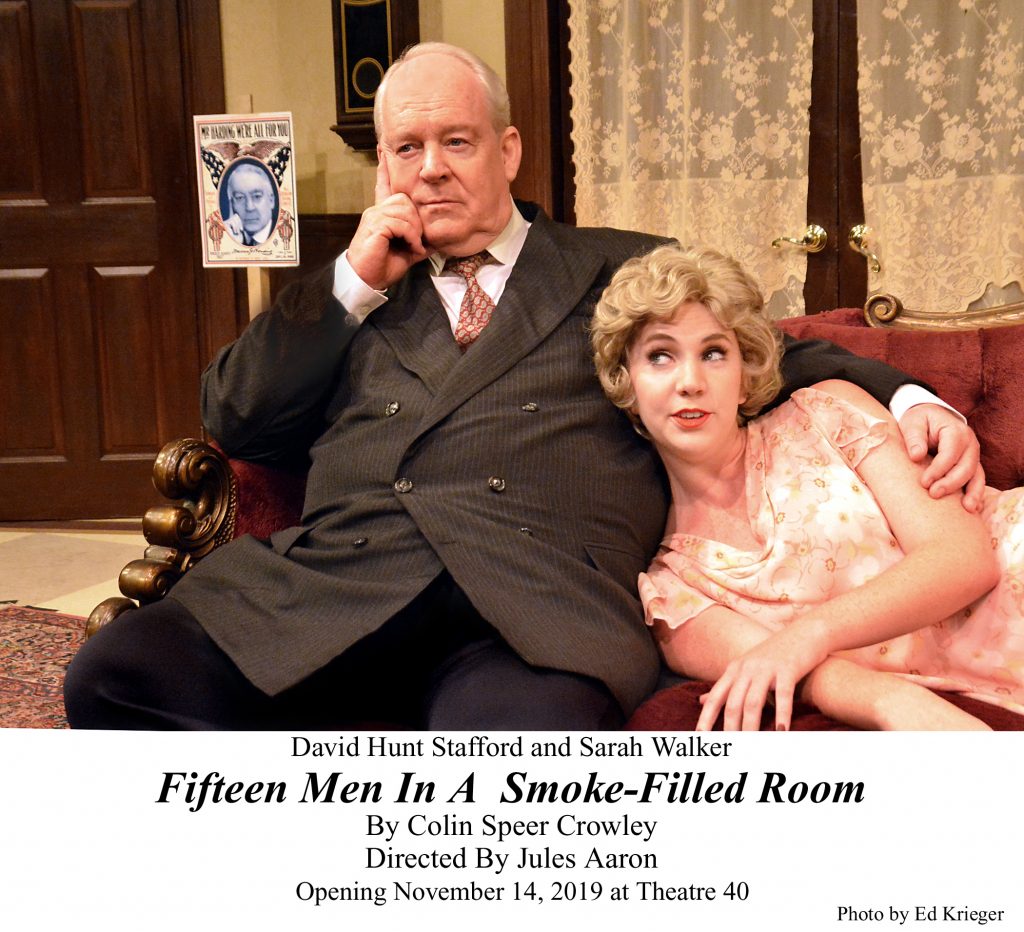 Cleverly assembled in a past-present format narrated by radio broadcaster (Roger K. Weiss), FIFTEEN MEN IN A SMOKE-FILLED ROOM trundles on to its inevitable conclusion – a sad day for the electorate as the Teapot Dome scandal rocks the country – as well as a sad day for the doomed Harding. A strong cast bring the 1920’s to life – with the able assistance of costume designer Michele Young and hair/wigs/makeup designer Judi Lewin. As always, Jeff G. Rack’s set is superb as it replicates the 1920’s ambiance. Another clever element which adds to the tale: the ghost-like radio announcer who portends the destruction of the principals in somber tones from a transparent wall. 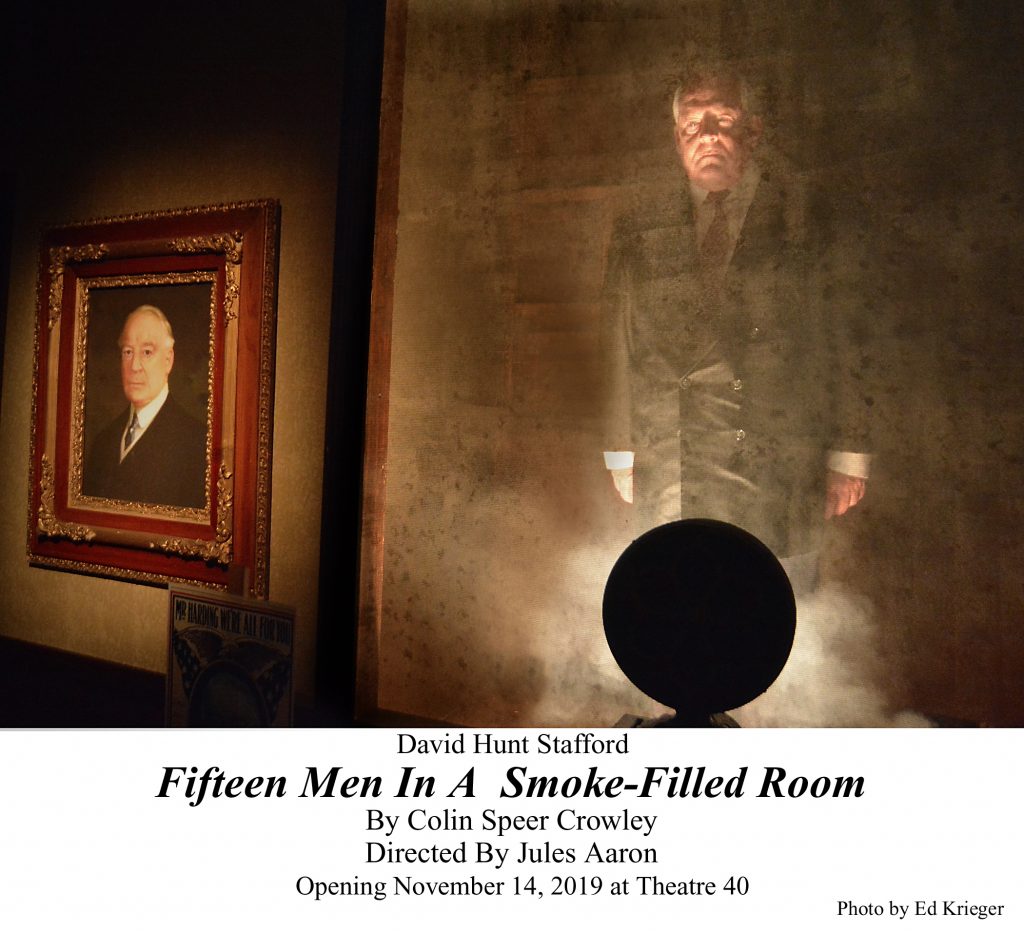 Of special interest, Theatre 40 will soon present their annual journey into the Doheny mystery which unfolded and is enacted in Greystone Manor. Their upcoming production, “The Manor” – billed as “murder and madness at Greystone Mansion” – gives the audience a chance to view corruption in the Harding administration from a different perspective in the same time period. The two make a fascinating set of twins. 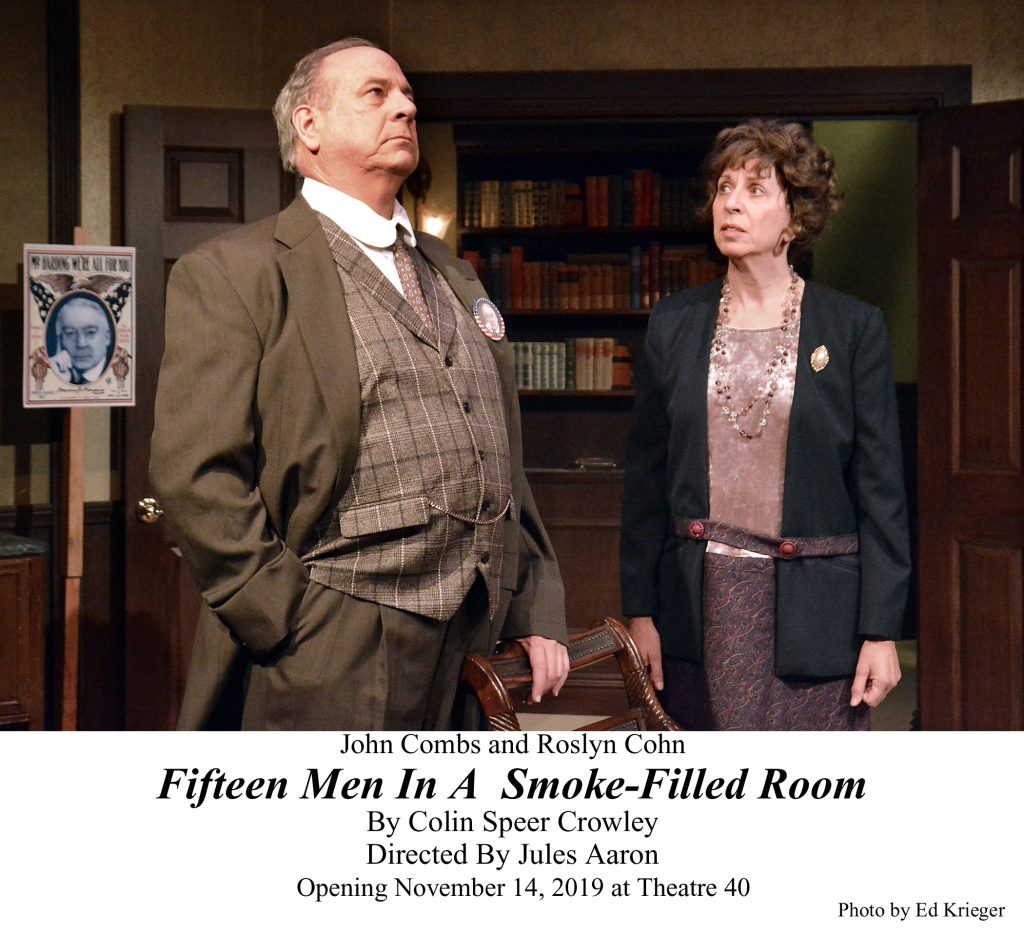 FIFTEEN MEN IN A SMOKE-FILLED ROOM could not be more timely, an intriguing glimpse of the political elite and their methods and means of influencing the future of the United States. History buffs will certainly enjoy this production – but the contemporary feel of events which happened almost 100 years ago will also appeal to current audiences.

July 25, 2018 Elaine Mura Entertainment 0
In the 1930’s and early 1940’s, screwball comedy movies were all the rage. Films like “It Happened One Night,” “Twentieth Century,” “My Man Godfrey,” and “His Girl Friday” titillated the crowds and kept the theaters […]

January 25, 2019 Elaine Mura Entertainment 0
It’s always a delight to see one of Rod Serling’s creative and entertaining science fiction/fantasy television episodes on the original “Twilight Zone.” So it was with anticipation that I arrived at Theatre 40 to see […]

After The Pandemic – Reflections by David Hunt Stafford

April 9, 2020 Elaine Mura Entertainment 0
Active for over 45 years as an actor and theater producer, David Hunt Stafford currently serves as the artistic and managing director of Theatre 40, a post he has held since 2000. He serves as […]