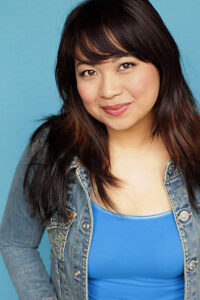 Actress and filmmaker Giovannie Espiritu was nominated alongside Academy Award Nominees Alfre Woodard and Amy Irving for Best Supporting Actress at Method Fest for the Mynah Films feature film Fiona’s Script. Her primetime credits include a recurring role on ER (NBC), Bones (FOX), Gilmore Girls (ABC), and Trauma (NBC). She can currently be seen as the lead in the Amazon series, “Dyke Central,” which was featured in After Ellen, BuzzFeed, Bust Magazine and Curve Magazine as a top LGBTQ series to watch. As a filmmaker, she was featured in Elizabeth Banks’ WhoHaHa Media for her parody song, “An Introvert’s World,” and her storytelling has been featured in Ms. Magazine. A three-time Outfest Fusion Filmmaker, her short film, Ultra-Feminist was awarded Honorable Mention. Her film, Ally 3000 just won Best Screenplay at the Culture and Diversity Film Festival (Los Angeles) and the Cyrus International Film Festival (Toronto). It also picked up several awards in the categories of Social Justice / Women Filmmakers / Scriptwriting / Humorist in the IndieFEST Film Awards and International Best Shorts Awards.

Giovannie also coaches kids/teens online nationwide through HollywoodActorsWorkshop.com and was just named as one of the top 40 Audition Coaches in Los Angeles by the Hollywood Winners Circle founded by Wendy Alane Wright, a top talent manager. Her students are represented by the top agencies in the Bay Area and Los Angeles and notable student alumni include:William Lipton (Daytime Emmy Nominee, Cameron on General Hospital) and the Espina Sisters (Hosts of Dreamworks’ “Life Hacks for Kids on the Road”).In her spare time, she rock climbs and advocates for Domestic Violence Awareness/Prevention and LGBTQ equality. She has served on the Board of Directors for C.O.R.A. (a Bay Area domestic violence hotline and agency) and been awarded a Certificate of Recognition from the Senate for her community service. She can be seen as Melody in the upcoming film, Middleton Christmas, alongside Eileen Davidson and Michael Paré. The inspiring teen drama is set to be released in the holiday season 2020. 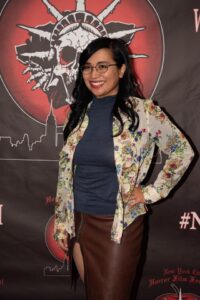 How long have you been an actor?

I started as a voice over actor in the San Francisco Bay Area in 2001, I think? I then booked my first union role on ER in 2003. I have been working pretty steadily over the years, first as on-camera talent and now I’m getting more into the behind-the-scenes production as well as content creation. I still love acting, but I want to help create the stories as well. What are some of your most recent productions?

In addition to Middleton Christmas, I have a short film called, ALLY 300 that is currently on the film festival circuit. I think it has won over 10 awards, mainly in the categories of social justice and scriptwriting. I’m working on developing my feature film, Dis-Graced, which is a comedy loosely based on my time in a doomsday cult.

As a cast member of Middleton Christmas, has organ donation affected your life in any
way?

I have always been an organ donor – I figure that if my life is gone, I might as well give pieces of me out to those that can actually benefit from it. 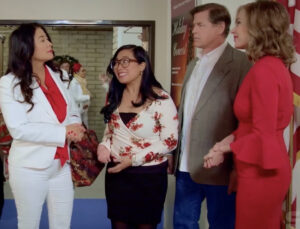 Middleton Christmas was set during the holidays… What are some of your favorite holiday
traditions?

I haven’t seen my extended family in nearly 7 years because they moved back to the Philippines. We used to have really bad Karaoke during the holidays and I miss that in a weird way. Right now, it’s just me and my kiddo, and my long distance partner when he can come visit… which is rare, especially in this pandemic time.

What was it like working with actors Micheal Paré and Eileen Davidson?

I think I may have a girl crush on Eileen Davidson. She was just so damn cool and collected and grounded. In this society (and in this industry especially), we are taught to be so scared of aging and growing older. I was fortunate to work with both Eileen Davidon AND Anzu Lawson who are both formidable artists and ultra-cool, sexy older women. This production had a slew of bad ass women working on it – including our producers Suzanne DeLaurentiis and Leilani Turner.

What are you looking forward to in 2021?

Honestly, I’m looking forward to hugging my friends again, laughing at comedy shows, and being able to sit incognito at coffee shops and people watch. But most of all, I’m crossing my fingers that the world comes out with more empathy and care for one another after we get through the devastation of this global pandemic. We need to re-learn how to care for one another.

October 4, 2019 Jessie Bond Entertainment 0
Spread the love
Spread the loveSarah Bernhardt is a name that has echoed through history. Although she played many leading roles in her six-decade career, the one she is perhaps best-known for is not one of the myriad […]

Sweet Tap Chicago Review – A Great Ode to the City

March 15, 2018 Eucarol Juarez Entertainment 0
Spread the love
Spread the loveOn Sunday I had the pleasure of seeing the Artistic Director Mark Yonally and Chicago Tap Theatre (CTT) performance of Sweet Tap Chicago at City Winery at 1200 W Randolph in Chicago. It […]

February 22, 2018 Jessie Bond Entertainment 0
Spread the love
Spread the love“That play seemed to revolve a lot around cocktails,” my boyfriend told me as we left Windy City Playhouse last night. “Honey,” I said. “It’s a play about a Southern dinner party. That’s […]