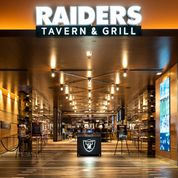 Attention Las Vegas Raiders fans! The Raiders Tavern and Grill is now open at the M Resort in Henderson, Nevada. If you are a local or are in Las Vegas during games, this is a must go. My husband and I attended the ribbon cutting ceremony on March 31 and were impressed by the facility. The world’s only official Raiders-themed restaurant offers fans and diners an unmatched sports experience and pays homage to the rich history of the Raiders.

The one-of-a-kind sports dining experience has a seating capacity of 200 guests. It offers both indoor and outdoor dining areas as well as private dining space in the Remy Martin Lounge for events and small groups of up to 20 guests.

There are two bars. The Remy Martin bar features a variety of cocktails containing the Remy Martin cognac. The bar also presents an incredible view of the M swimming pool and the Las Vegas Strip.

The Modelo bar serves the beer and a variety of cocktails featuring Modelo group beers. My spouse tasted the Mint Chocolate Chip Cocktail made with Vanilla Ice Cream, Godiva Chocolate Liquor, Crème de Cacao, Grey Goose Vanilla, and Chocolate Chips. It got a thumbs up from him. 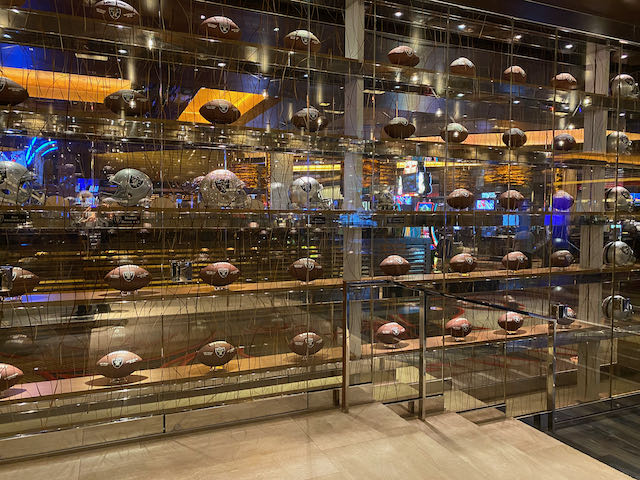 And then there is the décor. If you are fan of the Raiders football team, you will appreciate the Raiders memorabilia and photos that fill the interior.

I was given the opportunity to interview Hussain Mahrous, the general manager of the M Resort who shared his vision for the venue. He told me that the restaurant has 3,400 feet of dining space.

Mahrous said that he is pleased with the menu which is designed to not only serve standard stadium food such as wings, but also larger entrees and a variety of soups, salads, build your own burger selections and lighter fare.

We sampled small bites of several of the menu items. The wagyu skirt steak was served with asparagus and mashed potatoes. The Asian chicken salad was a nice light dish.We were also treated to the seared salmon as well as St Louis ribs with cole slaw and cornbreak. Mahrous commented that the bread pudding desert was one his favorite dishes.

Mahrous is confident that the merchandise store with official sanctioned clothing and other Raiders merchandise will be popular with fans.

Marc Badain, the Raider’s president, spoke at a press conference prior to the ribbon cutting and said, “this is the only branded Raiders Tavern and Grill in the country.” He is looking forward to seeing it filled with Raider fans once the season starts. And with a little bit of luck, fans may see some of their favorite players in the restaurant or othe spots at the M Resort. Their headquarters is only 5 minutes from the M. Henderson Mayor Debra March was on hand as well.

I was able to spend a few minutes with Charles Woodson, Alumnus and Pro Football Hall of Fame inductee. He was there to salute his team and talk about his Intercept Wines which are featured at the Tavern and have been a popular give away to frequent players at the M.

Football fans should visit the tavern just to see the exhibits and then stay for the food. Reservations are available on OpenTable, and the restaurant can also accommodate walk up patrons on a first come-first served basis. Restaurant hours are from 11 a.m. to 7 a.m. Monday – Friday and 10 a.m. to 7 a.m. Saturday & Sunday.

Fans of the Silver & Black can also commemorate the partnership by picking up their special edition Raiders-M Resort mychoice player cards for a limited time only. Visit www.themresort.com  for more information. 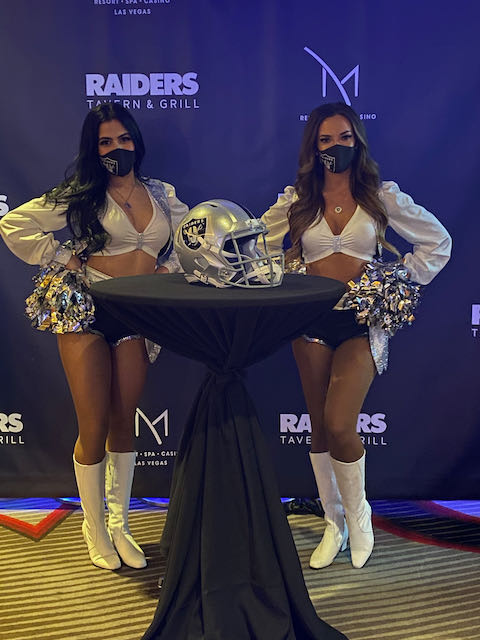 Raiders Tavern & Grill is independently owned and operated by M Resort Spa Casino, the Official Team Headquarters Hotel of the Las Vegas Raiders. We live about 10 minutes from the M so we will surely be back many times.

The Composers Showcase Returns To Myron’s At The Smith Center on Sept. 22 in Las Vegas

September 15, 2021 Dianne Davis Entertainment 0
Spread the love
Spread the loveLAS VEGAS – The Composers Showcase of Las Vegas (TCS) will return to Myron’s at the Smith Center on September 22 at 7:30 p.m., nearly 15 months since its last performance at The […]